Just a bunch of random stuffs I've been too lazy to post.

First off, the ficathons, starting with Not Prime Time. In other words, I actually wrote something this year that wasn't for Yuletide.

I got the best of Andy/Toby fic (West Wing). My one true ship from the series. :)

Andy's perspective on various events in s6 and 7

I wrote the inevitable Avengers/How I Met Your Mother crossover fic.

Maria's got a day off, but as usual, things don't go as expected.

And then there was Ship Swap so I wrote again. What is this world coming to?

Turlough and Sarah Jane Smith find themselves in a pinch in Antarctica.

I wrote a letter with several Americanisms in it since it was for my usual beta so she wasn't available to Britpick.

A letter from Jo Jones to her husband Cliff. The writing is big and almost illegible (except for the places where it is illegible). It's been folded several times and fit into an envelope that's almost too small for it. The flap was secured with a piece of duct tape with ducks on it and the envelope is liberally covered in stamps of various sizes and denominations. On the back of the envelope is written: "P.S. I didn't get this mailed before the plane took off, so I'm going to have to hand it to you in person." The envelope and its contents smell of buchu oil.

Yuletide has a Nominations Planning Post, a Schedule and Guidelines Post, and a Fandom Brainstoriming Post open, though not necessarily in that order. Which I suppose means it's time to start thinking about Yule noms and requests.

My current shortlist is very long, though.
Read All About It - I will probably keep nomming this until I get it.

The Blinovitch Link - 10 minute Sarah Jane audioplay. Raises more questions than it answers (When did the Ninth Doctor tell her about Blinovitch? Who is in control of the Earth in the future? Who is Sarah Jane running from? Will she live to be 146?)

The list I made in the Yuletide Brainstorming post:
Wizards vs. Aliens - since Sarah Jane Adventures ended (sadly) last year, Russell T. Davies has taken the crew and created a new series aimed at the same demographic. It hasn't started yet, so I don't know if it will be any good, but I'm inclined to trust Phil Ford and Gareth Roberts to write interesting stories (and even RTD reined in his worst tendencies when he wrote SJA).

Throne of Glass by Sarah J. Maas. A teenage assassin who's spent a year in the salt mines as punishment is pulled out to compete in a contest to find a new royal assassin.

The Girl of Fire and Thorns by Rae Carson. Elisa is the younger of two princesses and doesn't see herself as anything remarkable, even knowing that she is "the Chosesn one". On her sixteenth birthday she is married in secret to a foreign king. The book and the heroine take a lot of unexpected twists and turns.

The Goddess Test series by Aimee Carter Kate and her mother move back to her mother's hometown where Kate discovers that several of her classmates are Greek Gods and Goddesses. And then it gets complicated.

Tuesdays at the Castle by Jessica Day George. When Princess Celie's parents are lost in an ambush, she and siblings (and their magical castle) are the only ones who can save their kingdom.

ETA: Oh, I also was thinking about Little Mosque on the Prairie fix-it fic, since I was horribly unhappy with a plot twist in season 6.

And then there's the stuff that I've come up with since:

Manimal - Apparently the DVDs are out in England.

Princess trilogy by Jessica Day George. Tricky because I'm reading an ARC of the third, which won't come out until December and my prompt would involve the new characters.

The stop me if you've even heard of these section.

My perennial Parrish/Jordan request (Janet Lambert). Long series and no one seems to have read them.

Henry Reed by Keith Robertson. One of the beloved series of my childhoold.

No Flying in the House by Betty Brock.

The Dark Green Tunnel and The Wand by Allan W. Eckert (Fantasy for children by an author who's noted for writing historical fiction for adults, the series didn't sell well and was never finished.

Over the Hills to Fabylon by Nicholas Stuart Gray.

The Wizard Children of Finn and its sequel by Mary Tannen.

The Cloud Forest by Joan North.

/End books and series no one has heard of but me

For Love of Chair - Electric Company (original version) sketch. This one is almost certainly going to make the cut.

Also, for those of you so inclined, the irc channel (#yuletide on irc.sff.net) is starting to perk up a bit. Come back to chat. All is forgiven.

On to tv. Still watching Project Runway for the sewing pr0n. Spent about a week mainlining Little Mosque on the Prairie. Currently watching Avengers: Earth's Mightiest Heroes when it shows up, Doctor Who and Warehouse 13 and doing a rewatch of Warehouse 13 on Netflix. I'd forgotten how season 3 episodes almost consistantly had one plot I loved and one plot I hated.

Sort of looking forward to the new TV season, but I can't think of anything I'm really excited about beyond How I Met Your Mother and NCIS. Which is not to say there isn't anything else, just that I'm not thinking of it right now.

In other news, new coworker will be joining our Doctor Who watching parties once other stuff stops getting in the way. And in retrospect, Invasion of the Dinosaurs is still the best Doctor Who Dinosaur story. :|

I've been reading a lot of Angela Brazil off Project Gutenberg and I now know that she likes the following things: long-lost heirs, nature, unconventional schools, being true to your school. I think it may be time for a break, so my next Gutenberg batch involves a lot of Nell Speed (who has different issues). :)

I've been reading a lot of graphic novels too. And advanced reader copies off of NetGalley.

Not so recent YA & middle grade authors that I recently read something by that reminded me why I liked them:
Angela Johnson
James A. Owen
Eleanor M. Brent-Dyer
Hilary McKay

And a reminder that if you are interested in what I'm reading, I track my reading on both Goodreads and Shelfari. And yes, I do read that fast, though if you see me listing many books in a day, probably a few of those were things I'd been in the middle of for a long time.

Craftiness
Still working slowly on the Grand Canyon cross-stitch - there will be a picture when it's done and framed. Started Holiday Yarns' Steampunk Socks (about two-thirds of the way down. I also cut out the Marvel superhero fabric for the backpack, but I think I need fleece and interfacing. I shall go over to Joann's this weekend to get it (and stop for my comics while I'm up there). I also need yarn for MMario's latest Mystery shawl (a choose-your-own Pi) as the yarn I have is unsuitable (either too heavy, too light, or multicoloured).

Buns at Breakfast this morning 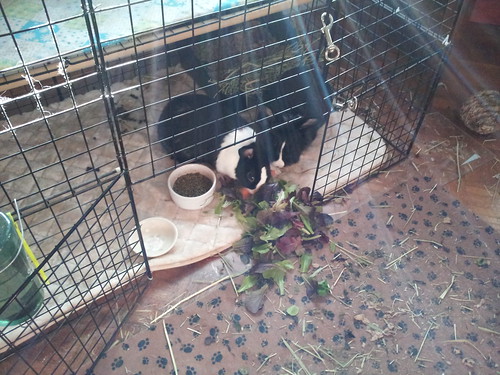 They are such stereotypes. Once again they went straight for the carrots.


This entry was crossposted at http://evil-plotbunny.dreamwidth.org/21182.html. Comment wherever you choose. (There are currently

comments on Dreamwidth.)
Tags: bookety books, bunny, ficathon, knitwittery, sew and sew, the state of the plotbunny, tv what i watch, yuletide
Subscribe