I suspect it's allergies coupled with exhaustion, but I feel lousy and out of sorts today.

I would have loved to take the day off, but we were showing three movies in our program room today, and as the resident AV geek (AKA the person who knows how to connect up the projector, DVD player, speakers and amplifier), I had to come in. So I did the next best thing, and sat in a darkened room and kept an eye on the kids in the movies and knit.

The Adventures of Sharkboy and Lavagirl was good despite the heavy handed messages that I've come to expect from Richard Rodriguez, Spy Kids 3-D I'd seen before, and Shrek was bearable despite my preference for old-fashioned 2-D animation and my dislike of Eddie Murphy.

I got about six inches done on my Doctor Who scarf, which means that I'm more than halfway done.

Now I'm just killing time till I can go home and take a nap. :(

Off to figure out what's going wrong with the teen database.

is now taller/longer than I am by about six inches. I knew this day would come someday, but it's still a good feeling.

I'm using size 5 needles, so it will be shorter than it's supposed to (but then I'm short and I don't want to trip over it too much). I'm guessing 12 feet when done.

No, this doesn't mean I'm leaving LJ. But it's been about a year since I started using this journal actively and since I lose at social stuff, I thought I'd see if there was someplace else I should be as well.

Open to: All, detailed results viewable to: All. Participants: 6

Forgot to add an other option. If that's your choice, that's what the comments are for.

Also, I'd love to hear reasons for any of the above. ;)

Edited to whinge: why does LJ expect you to vote in your own polls? I don't wanna have to click through to see the results. :(

Someday, I might get around to listing links to the sites I vist often in the sidebar...I don't think of it because the blogs I read by RSS and the rest of the stuff is bookmarked on my computer.

But as a step in that direction, I thought I'd recommend these two blogs about kids and YA books.

Read Roger. Roger Sutton is the editor in chief of Horn Book, one of the best children's book review journals out there. The blog is part of the Horn Book website, and always has interesting tidbits, recommendations and commentary on the state of children's book publishing.

Worth the Trip is a brand new blog focusing on LGBTQ books for children and teens. Alternating reviews of new books with looks back at "classic" gay literature, it's quickly became one of my favourite blogs. 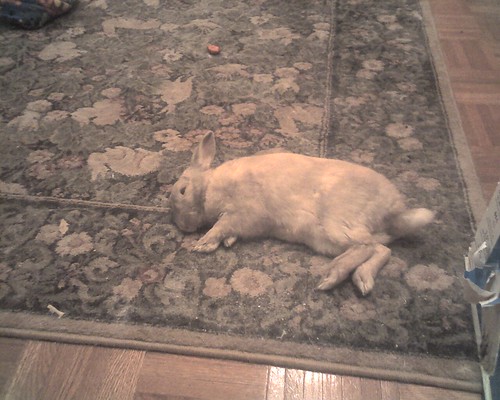 We have a piggybank at work to collect money for our Rif program.

We showed movies today, so I was "supervising" and knitting (I did over fifty rows over the course of three movies) and just before I went home, I took some pictures.